Kim and I booked a VRBO in Steamboat for the race.  I came alone but Kim brought her usual crew Ty (husband) and Matt (Ty's brother).  I also texted Bee and discovered he didn't have a place to camp and invited him to park his super cool camper van at our VRBO.
We had a fun night with dinner and hanging out perhaps a bit too late after the race briefing.  It had rained most of the day but the forecast promised clear weather for the race and perhaps some rain in the afternoon.  Kim's pacer Erin also arrived that night and the condo took on a party atmosphere.
Race morning.  I had a decent night of sleep and wasn't ready to get up until 6:30 or so.  Apparently everyone else had different ideas so I was up shortly before 6 AM, ate breakfast and got dressed.  The weather was looking good out there.  There were talk of not starting with rain jacket but I was convinced to always keep rain gear on me.
I had made up my mind that I needed to go slow, like super slow, in order to have any hope of surviving this race.  I started the conga line of climbing the ski hill way in the back with perhaps only 30 runners out of the 200 or so behind me.  But the people around me still went faster than I wanted so I found a spot to go wet the bush and take my jacket off to let those speedsters go by.  By about half way up the ski hill, the cloud moved in and we were running in the mist and could hardly see the gondola.
I met Ty, Matt and Bee's crew Corrin at the little building where we come out to the dirt road.  Somehow I had passed Kim without realizing it, but Bee was a couple minutes ahead of me.  By now it was getting cold and a few minutes later I put on my rain coat and the rain started shortly after.
Rain tapered off by the time I got to Mt. Werner aid station where I saw Bee leaving.  I tried to get his attention but he was too focus to hear me and took off down the trail.
The first couple miles after Mt. Werner was gentle down hill, and rain had stopped.  I fell in a pack with a small group of runners and had some good chats down to Fish Creek trail junction where we skip the 3/4 mile to Long Lake aid station this year.  The rain continued to hold off and as we descent Fish Creek trail the temperature warmed up significantly.  The rocky descent was quite a bit more treacherous this year due to the rain.  I run into Bee coming back up the trail about 1/2 mile from the aid station at the bottom so that puts him approximately 15 to 20 minutes ahead of me.  He looked happy and strong.
At the bottom I ran into the whole crew, Ty, Matt, Erin, and Corrin.  I was in good shape and ate some food and manage to not lose my poles this time.
Going back up Fish Creek trail, a runner asked if he could tag along with me and why not!  I found out that this was his first crack at 100 after a few 50's and he's from southern California. He was super concerned that we won't make the final cut off and I assured him that at our current pace and location, as long as we keep moving at this effort level we'll make the cut offs with hours to spare.  We pulled another runner named Patrick into our posse and learned Patrick was a seasoned 200 mile runner.  We got some good tips from him in case either of us wanted to tackle a 200 miler in the future.  About 30 minutes up Fish Creek, I saw Kim coming down.  She looked happy and told me she's better now than before then bounded down the hill.

My stomach did eventually recover and I drank another IPA and ate some soup back at the condo.  I was bummed that Kim didn't get the chance to finish the race but was super happy to have the opportunity with run with her and Ty and have them crew me during the most difficult portion of the race.
I gave myself a few weeks of not doing much, knowing the post COVID race recovery requires far longer time.  By the end of the month, I was deep into preparing for our big White Rim Trail outing.  I had initially scoped out the White Rim last fall doing a solo ride.  I managed to get some camping permits this fall and lined up a group of 14 friends to ride the trail over 4 days.
The White Rim was originally build for uranium mining.  I guess the uranium ran out?  But the trail remained and is now part of the Canyonland National Park.  It's one of the great overland routes for vehicles and bikes.  Very few people have actually ran the whole thing.  That's on my bucket list.
We choose to go counterclockwise wise direction, mainly due to the availability of camping permits.
Day 1: We started at the junction of 313 and Mineral Bottom Road just outside of the national park.  The first 13 miles was a gentle downhill on a pretty dirt road then we arrived at a chasm in the earth where the Green River flows through Labyrinth Canyon 1,000 feet below us.

I originally had envisioned Jade and I take turns driving the chuckwagon and riding the bike.  Turned out Jade wasn't really into driving vehicles off road, so I ended up driving most of the miles over the 4 days.

After about 22 miles we arrived at the crux of the day, the climb over Hardscrabble Hill.  My chuckwagon was the least capable so I led first.  The other two Jeeps probably never even felt the rocks.
Once we got over Hardscrabble we settled into our first camp at Potato Bottom where there was some nice cottonwood for shade.

Day 2: We had a shorter day to ride some easy terrains to Candlestick camp.

Shortly after lunch we arrived at Holeman slot canyon for a much needed break in the shade. 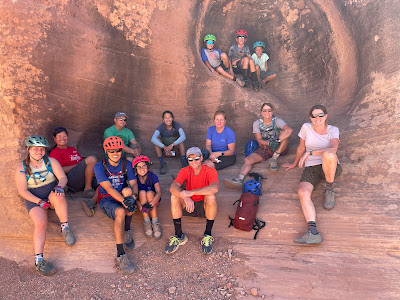 This is the only section I got to ride the bike since it was easy enough for Jade to drive the chuckwagon a bit.
I followed Amelia into Candlestick camp. 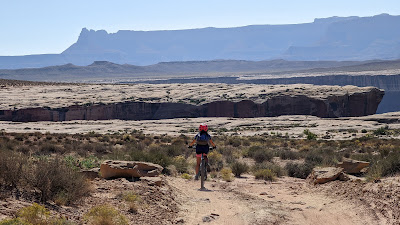 We got to Candlestick camp fairly early in the afternoon and it was hot and sunny so we rigged some tarps for shade.  After dinner, we went to explore the edge of the cliffs and found some really great views and shallow pools that supported life.

Day 3: This day's big obstacle is the infamous Murphy's Hogback.  I had told the group that the trail is rolling with an upward trend for about 10 miles to Murphy's, and the rollers get "sharper" the closer we get to Murphy's.

At the summit of Murphy's we pitched the tarps for a nice shady lunch then descended the other side for about 15 miles of easy riding to the day's camp at Gooseberry.

Day 4: nothing like a 28 miles day that ends with a bang.  Shafer's trail was what everyone's dream/nightmare that awaits us at the end of day's riding.

After 4 days of piloting the chuckwagon on the White Rim with plenty of time to think and plot, I think I came up with a viable plan for a self supported run of the White Rim.  The timing will be tricky.  I'll need to cache water in two spots along the trail.  The weather has to be cool to minimize water consumption but not cold enough to freeze the water cache at night.  Stay tuned.
Posted by Jim at 12:18 PM No comments: