I first learned about Pikes Peak Marathon when I was researching about Umstead Trail Marathon's elevation profile in 2010 and came across Anthony's popular post that compared some famous marathons to Umstead.  Ever since then I had wondered about the prospect of running a marathon on Pikes Peak.  I have read Matt Carpenter's website with course description and other tidbits that he posted there.  Since Matt owns the PPM's course record and is generally considered Mr. PPM, the advice he suggested are second to none, such as this one "Oxygen is overrated, keep running!".

Once I found out I was moving to Colorado Springs, PPM naturally was on my list.  The registration for the 2016 race is at noon on March 12th.  I had booked this date on multiple calendars.   A few days before the registration, I went to the race website and discovered the race cost $175!!!  Holy f--k!  Even Umstead 100 only cost $180 and they provide a 30 hours buffet of Golden Corral style food.  Screw that, I can run this race on my own term and not pay a penny.

Weather forecast was good and bad.  Almost no wind on the summit, however there maybe a storm in the afternoon.  Now a storm on a 14er summit is no joke.  No one wants to experience it.  So this means an early start and get back down in the trees by noon or 1.

Before this I had gone up Barr Trail as far as 2.5 miles from the summit.  That was not a bad run, took a leisurely 6.5 hours to do.  I even ate lunch at 12,300 ft turn around enjoying the sun.  Today would be different.  I had gone up two other easy 14er's in the past two weekends so I was hoping I'm a bit more acclimatized.

5 AM and I hit the road from Memorial Park in Manitou Springs.  I could have parked at the Barr Trail's trail head but didn't for two reasons.  PPM actually starts at Memorial Park, and the trail head parking cost $10.  I'm a dirtbag.

1.3 miles and a couple hundred feet later, I hit Barr Trail.  I usually come here later in the morning when the trail is full of people who did the Incline and coming down on Barr Trail.  However at 5:20 AM, there wasn't a soul on the trail!!  Yeehaa!  The first 3 miles of the trail is one of the steepest sections, called the W since that's what it looks like on the map.  It has 13 switchbacks and gains 690 ft per mile for 3 miles which is 13% grade.  I remember I used to bitch about the 6% grade on Powerline hill in Umstead or the the 8% grade on Cemetery hill.  Knowing this is gonna be a long day, I take it easy here.  For the first time in Colorado I wore my heart rate monitor and it's a great tool to manage the effort.

After the W's I see snow and ice on the trail so I put on the Microspikes.  These things are awesome for running in snow ice and slush.   Today the trail condition is mixed between mile 4 to 7 with alternating dry trails and snow.  Still it's a good tool.

I hit Barr Camp at mile 7.5 and 10,150 ft in 2:42, which is actually one of the faster efforts surprisingly.  Stopping is out of the question since once hot chocolate and coffee is served, I usually stay for an hour or more digging the caretaker Zach's brain.  Zach is twice the runner that I'm.  No he's not twice as big, but twice as fast.  He recently won CCC and TNF 50 championship.  I did fill my water bottle with some unfiltered stream water at Barr Camp.  Giardia takes 7 takes to show symptoms, won't affect today.  Barr Camp is considered the half way point to the summit both in elevation gained and time spent.

From Barr Camp, the trial became completely covered in snow.  Fortunately there has been enough traffic to create a hard packed snow trench that's between 8 to 12 inches wide.  However any steps off this hard packed stuff results in serious postholing, not fun and can easily pull the groin muscle.  It's not much of an issue going up due to my glacial ascending speed.  But running downhill with speed on this stuff, it is easy to go off and posthole.  It takes me 27 minutes to get to the next landmark called Bottomless Pit sign at 8.75 miles and 10,800 ft elevation.  The real Bottomless Pit is another couple miles to the right.  A day may come where I head right to the Pit, but not today.

From A-Frame I ascend above the trees and into the barren east face of Pikes Peak. 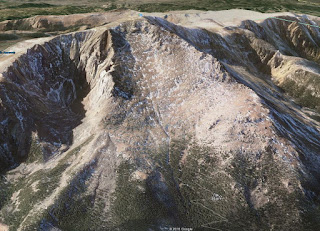 Trail here is mixed of dry trail and wind blown snow.  It hasn't snowed much in three weeks so what I saw here are mostly left over and deposited by wind.  After 35 minutes of zigzagging I come to the 2 miles to go sign on the right side of the east face.  From here the trail basically traverses all the way across the face to the left side.  Here I encounter something I never imagined.  The trail goes under a perfectly smooth about 25-30 degree sloped snowfield.  Obvious the work of wind.  Apparently no one else has crossed it so there were no tracks on the slope.  My Microspikes are great running on even snow, but this is more crampons/ice axe territory.  I imitate the mountaineers I see on TV by kicking the slope to make steps.  But after a few kicks the only thing I did was to make my toes hurt.  I guess you need big boots and crampons for that.  Then I did the next best thing, got down to my hands and crab walk across.  Yeah not pretty, and pretty scary too.  A slide means hmmm.....bad.  After I make across the snowfield, I find another one a few hundred feet later.  Crap...crab walk again.

After the excitement of the snowfields, the traverse was pretty uneventful except for my breathing which was somewhat out of control from the combination of exertion of the crab walk and fear of death.  I get to the next land mark the Cirque sign which is just before the 1 mile to go sign.  I didn't know what the Cirque sign meant "1500 ft deep".  The I walked to the edge of the trail and saw it.  Yes, it does look like a 1500 ft straight drop.  I guess is someone is really struggling during the race, they can end the suffering right here by going off the trail into the beyond.

The trail next traverse back toward the right with some switchbacks that has deep snows on the trail but no snow at all off the trail.  Go figures.  Then comes most infamous sign of all, the 16 Golden Stairs.  This is suppose to be 16 pairs of switchbacks with huge boulder to climb over at each one of them.  I tried and lost count, since I spent most of the my time here hugging the boulders dizzying from lack of oxygen and trying not to tumble over the edge.

Summit of Pikes Peak was somewhat anticlimactic.  There was a cog train waiting to go down and a lot tourists walking around.  I didn't stop long just enough time to eat my nutella-jelly sandwhich (I ran out of peanut butter).

Going down, I was determined to avoid those damned snowfields.  On the grand left to right traverse, I picked a gentle looking spot and got off the trail.  I took a bearing toward a set of huge boulder formations at 12,500 ft and went straight for it with three big horn sheep watching me from not 50 yards away.  Unfortunately I should have scouted the route a bit more carefully.  I end up on more snowfields on this new route, not as steep or as exposed but just as tedious.  I remembered seeing people on other peaks doing this thing called glissade where they slide down snowfields with ease and descent with little effort and a lot of speed.  I decided to give it a try.

Turned out I don't know how to slow down.  I glissaded right out of the snowfield into a scree field. At least I missed the boulder field since that could have ruined the day. This is my first time ever experiencing scree.  They don't stay in one place, they actually move a lot, like an avalanche sort of way.  And they get inside of everything including shoes and pants.  Pulling scree out of my underwear is now my newest trail running trick.

Here is my route on the ascent and descent of the east face. 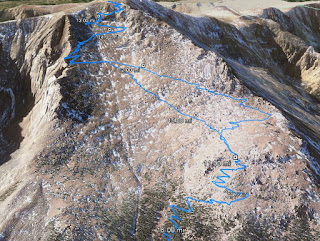 Rest of the run was uneventful.  I apparently can not navigate the trail around A-Frame.  For the second time in the row, I took a different way down past A-Frame.  I don't know how that happened.

Ascent took 6 hours and 6 minutes, descent took 3 hours and 22 minutes.  And I did stop at Barr Camp on the descent for a cup of hot chocolate.

Pretty views from the summit. 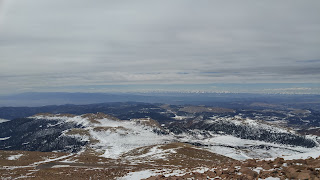