I originally planned to drive up to Morganton and camp at Mark's house Friday night, since Mark lived only 10 minutes from South Mountain State Park.  However Jade's last minute consignment shopping means I get to stay home with the babies on Friday night.  So I woke up at 2:30am on Saturday morning and left the house at 3:30 am for the three and half hour drive to the race.

Somewhere near Burlington, I realized I had left my wallet back at home.  My car was down to a quarter tank at this point.  I could turn around and go home but that means I would start late, way late, like and hour and half late.  I went to a gas station and started talking to the gas station manager about options.  I told him I knew my credit card number, but he was pretty iffy about that without any kind of photo ID.  Finally it dawned on me that I may have send a scanned photo of my driver's license to someone in the past so I started searching on my phone for past emails and hallelujah, a scan of my driver's license and my credit card!  He saw that scan and finally decided that I was likely not a credit card thief.

Pulling into South Mountain State Park at 7 am, I noticed all the towering ridges around me.  It seems like the road leading into the park followed the bottom of a steep valley.  The impression I got is every trail here goes UP.  As I collect my race packet and get my hydration pack ready, I looked around and realized everyone I see seemed really fit.  Seriously this is the fittest group of runners I have ever seen at started of a race.  Every one is lean, and every one is ripped.  It made me really question why I'm even here.  I don't belong to this group!  I'm a slow plodder, and everyone around me seemed capable of running in circles around me.

We started with a bull horn blast and ran across the parking lot and I intentionally settled into the very back of the pack of 50 runners.  The trail immediately starts to climb and I settle with the back of the pack into a power hike.  The race is divided into five sections, Alpha, Bravo, Charlie, Delta and Echo.  Alpha section is just under 6 miles, with the first 4 miles climbing on a rugged steep jeep road, then the course drops off the side of the mountain on a steep technical single tracks dotted with slippery steps.  Here I met Kathy from OBX, where the biggest hill is the Wrights Brother memorial mound, and she pulled away from me while bombing down the mountain.  How in the heck did she train for this?

At AS1, my legs were a bit wobbly from pounding down the mountain.  After refilling my pack, I took off down Bravo section with three other runners in a loose pack.  The first mile and half were fairly mild with only 300' of elevation gain and two cool creek crossings.  Then it turned upward in a mad 30% grade along an ridge line.  Here I manage to let everyone get ahead of me, since it was useless try to keep up.  Fortunately the madness was short, not even a quarter mile but climbed over 450'.  Then the course emerged onto a decent jeep road and gently climbed to 2'600 ft before a long quad pound descent back to the same aid station.  By now my legs were ready for a massage, with quads and IT bands screaming on the downhills and hips and calves screaming on the uphills.

The friendly volunteer at AS2 promised less hill for Charlie section.  He was right, at least for the first 1/2 mile.  Then we hit the waterfall part, where a section of super steep stairs climbed to the top of the falls.  My strategy for the stairs was to do 10 steps, then rest, then repeat.

Charlie wasn't done after the waterfall yet.  I met a runner named Wayne from Georgia and we climbed more moderated grade jeep trails (like 15%) for awhile, then dropped off along a single track into a cool creek valley before climbing steeply away from the creek.  Wayne was bothered by leg cramps so he couldn't down hill much so eventually I left him.  I get passed by Jake who had gotten lost and ran extra 9 miles in Bravo section and still manage to pass me by mile 17.  After the long climb along the single track trail, I ran gingerly down a steep jeep trail for a mile to protect the quads from cramping and came across a beautiful creek with a beach along it so I took the opportunity to cool off and laid down in the creek and thoroughly chilled myself.  5 minutes later, I was overheating again because the damn trail decided to climb another 500 ft to the end of Charlie section.

AS3 is located where the trail pops out onto a private road.  I met a couple in the aid station and they looked as fresh as at the start of the race, and the woman is wearing a pair of sandals!  I couldn't imagine how she could run these trails in them.  Delta section follows the road for about a mile with no shade and it's 1:30 or so in the afternoon, and temperature hovering around 90'.  I was more than happy to see the course re-enter the woods at end of the road and starts down the mountain along a gentle single track.  Normally this kind of trail and terrain would mean fast times, but with quads completely shredded, I could only manage to plod along at a snail pace with occasional walks to relieve the pain in my legs.  Finally the sections comes to an end with a godsend creek crossing to cool off and a short out and back section to AS4.

The fine folks at AS4 promised me there are only two climbs left in Echo section but was vague on the details.  A thunderstorm approached as I took off down the short out and back spur and crossed the road to start the first climb.  Within minutes, the storm came down and the jeep trial became a creek.  On the other hand, I was no longer overheating.  I actually got a bit chilled from the driving wind and rain, and probably from the fear of getting hit by lighting.  Later on I would find out another runner actually saw a lighting splitting a tree no more than 50 yards from him.


20 minutes later, running scared, the storm finally settled into a nice rain.  The trail turns down the mountain along a slippery single track and I caught up to Rachel.  Rachel is also from OBX.  I honestly can't think of a good reason why someone from OBX would choose to run this race.  We stuck together for the next few miles as the trail once again turn skywards toward another long climb.  We marveled how it is possible to cram these many hills in a 50k.  Super relieved to hit the summit, we started slowly jogging down the hill, then the trail disappeared.  More accurately disappeared downward.  The steepest downhill in the entire race lay between us and the finish.  500 ft down, in about a third of a mile of slippery muddy trail at very end of the race caused us to mutter more than a few curses.

I was super relieved to discover the final half mile of the race is flat.  Flat!  Holy cow!  I rocketed toward the finish line moving at a lightning pace (hmmmm.....about 9 min pace...lol) and touched the Bigfoot's head at 8 hours and 45 minutes.

It's gonna be a long drive home Sunday, especially after 5 beers, 3 sangria's and staying up until 2am on Saturday night.
Posted by Jim at 6:06 PM No comments:

There isn't really much to say about this race, except that with 5 hour cutoffs at end of Bravo section (4700ft up/4700ft down), 8 hours cutoff at end of Charlie section (6700ft up/6700ft down), my chance of DNF this weekend is excellent.  Maybe I should bring more beer instead of running hydration since beer will more likely to be consumed after an early missed cutoff. 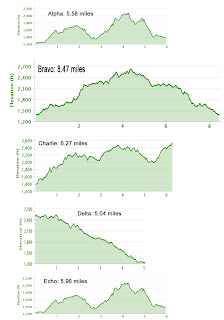